Algot Wilhelm Kåge (6 March 1889 – 25 November 1960) was a Swedish artist and designer, mainly known as a ceramic designer and as the artistic leader of the Gustavsberg porcelain factory.  (Wikipedia)

Wilhelm Kage (originally Nilsson) was born in 1889 and died in 1960 in Stockholm. He was a Swedish artist, painter and ceramist. He was the artistic director of Gustavsberg from 1917 until he was succeeded by Stig Lindberg in 1948. Even though he was a pioneer in poster design in his early years, he was hired by the Gustavberg factory in 1917 to reinvent their dinnerware. (Berg Gallery)

A note from Pat, inside the vase: 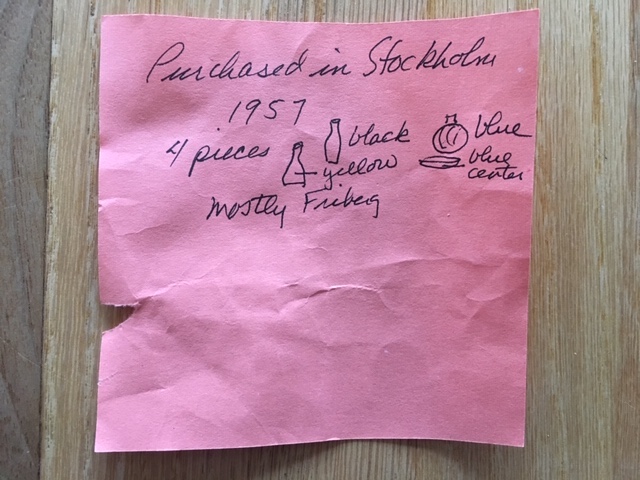 The yellow and black Friberg pieces are HERE.  I haven’t figured out what the piece with the blue center is.

This is from a series called KAPA.

In the late fifties, Kage wanted to secure the future of the Gustavsberg studio. He put away his title, both literally and creatively, and began collaboration on a range of appliances based on the same material used for making WCs and washbasins. The blue or brown KAPA-goods from Kage’s new workshop was an attempt make series of usable art goods, vases, dishes, various bowls, creamer and sugar bowl and a really classic teapot. The items were fired among the WCs and were mainly intended for export to the United States. But the series was not a success and production was closed down at Kage’s death in 1960.

The signature letters KAPA stand for four persons involved in the production including. The series is coarse and massive, you know Kage’s presence in the heavy bowls, in the grand vases and machine parts design. But the design was made as much by the other three in the KAPA-team. K in KAPA stands for Kage. A stands for Birger Arvidsson. He had been Kage’s right hand since 1950, when he was handpicked for painting Argenta. Birger Arvidsson could translate Kage’s sketches into craft, he could read his “language” and performed complicated decorations. P stands for Axel Pettersson, who was a turner from southern Sweden. It is said that he was an even better turner than Friberg, but he never had any ambitions to create his own art. The last A stands for Alskog, Bjorn Alskog, a 21 -year-old that came under Wilhelm Kage’s wings in 1955 after being a turner for Stig Lindberg. Alskog was ambitious and led the work in Kage’s workshop with the “old man’s ” blessings.  (Berg Gallery)

More about KAPA and Wilhelm Kåge